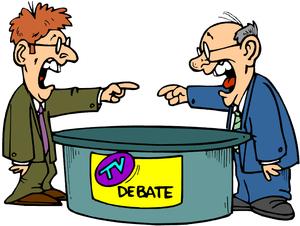 There has been a lot of fallout after last Saturday’s RNC debate in South Carolina. The commenters in the political web sites I regularly visit have express their disgust with how fast things deteriorated into a personal attack fest. I didn’t watch the debate – I had a family obligation – but even reading the transcript the next day gave me a headache.

To me, it’s pretty obvious what the problem is, that the debate formatting is the source of all this nonsense. In television, the format, or overall structure, adopted for any program is designed to achieve the program’s objective. (The objective is the overall purpose of the show, such as entertain or educate.) Anyone who has watched more than one of these debates knows that the format used has been the same. Question, sixty seconds for the answer, then any candidate can rebut the answer if they are mentioned, i.e. attacked, followed by the next question.  I believe that format is designed to increase the amount of conflict in the debate program under the guise of highlighting the differences among the candidates.

That’s all well and good, and I respect the right of the networks to make a profit, but is that format giving the audience what it wants? I (and a lot of other voters) would like a substantive discussion of issues and policies. Yes, such a program would be a little wonky, but I like to know more about for whom I am pulling that lever, and I don’t need (or want) the media spoon feeding it to me.

So, here is how I would format the next RNC debate: Seat the candidates at a round table in comfortable chairs. Maybe not having to stand for two hours might make them a little less snarky. (Hey, it’s my daydream, OK?) The candidates will be instructed to present their views and no one else’s. Candidates may respectfully disagree with each other and are encouraged to do so, so long as there are no attacks, e.g. “You’re lying.” The discussion is to remain civilized.

Any candidate who starts attacking gets their mic turned off by the moderator. There will be a big red button on the table next to the moderator – maybe Staples will sponsor? – and when that button is pushed, the sound feed is killed to the house and the TV truck. All the attendees and viewers will see is a politician moving their lips with no intelligible sound coming out. The cynic in me wonders if anyone will notice the difference.

But I digress. We’ll need a tough, but fair, moderator who will be willing to ride herd on the candidates and push the button when needed. My choice would be Sharyl Attkisson, who is a darn good journalist, IMHO. I don’t think she would hesitate to kill the mic of an out of control politician. The candidates would learn to rein themselves in pretty fast, lest they look ridiculous on air. (I did say this was a daydream, right?)

The reality is that my proposed format won’t be adopted. Six is a lot for a round table discussion, and there would be a lot of pressure on the moderator to make sure everyone got something close to equal mic time. The first RNC debate, with 17 candidates, would have been impossible to do this way. It’s too bad, really, since all of the RNC candidates bring something to the debate table with regard to policy. (Even Gov. Kasich, who annoys the crap out of me.) It would be nice to hear their views unencumbered by all of the drama.

3 responses to “How I Would Run the Debates”

This site uses Akismet to reduce spam. Learn how your comment data is processed.